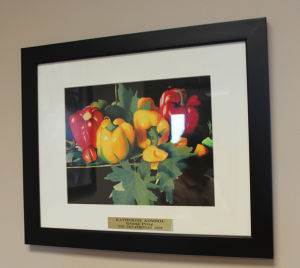 Previous winners of the UNC Chapel Hill Nutrition Research Institute’s art contest are displayed at the group’s facility at the North Carolina Research Campus in Kannapolis.

KANNAPOLIS, N.C. — Celebrating five years of the North Carolina Research Campus in Kannapolis, officials with the UNC Chapel Hill Nutrition Research Institute are organizing a summer art and essay contest. The contest is part of the Carolina in Your Community campaign.

The contest is open to pre-k through 12th grade students, and the overall grand prize is $100 with $50 prize for each category’s top winner and honorable mentions with various prizes. Some of the artwork will also be hung at the UNC Nutrition Research Building, where art from previous contests are shown now.

Dayvault said with that in mind the theme for the art contests is health, nutrition and getting active. He said some ideas for art could show someone bicycling or running through Kannapolis or eating nutritious food. Dayvault said he’d like to see someone do a piece of artwork that promotes health and fitness and has the North Carolina Research Campus buildings in the background.

“Frankly, we don’t have any drawings of the buildings that kids have drawn, and it would be really neat to see that,” he said. “That’s something I’d like to see come out of it is something that incorporates the images of the building with that type of lifestyle.”

The essay and art competition with area students is just one way members of the UNC Chapel Hill Nutrition Research Institute have been involved in the community. Officials with the Research Campus have also been involved in Kannapolis Kares Day, coat drives for local charities as well as Kaleidoscope Cultural Arts Festival.

“We try to continuously have a role in the community,” Dayvault said.

Plus, projects like the essay and art contest can help officials seek new talent for the research campus. Steve Zeisel, director of the UNC Chapel Hill Nutrition Research Institute, said they have science fairs for elementary school students at the UNC Nutrition Research Building, as well as other programs that expose children to science.

“One of our major goals is to build the base for a science-based economy here and the first thing you have to do is have the future workers show up and get trained and we start young,” he said. “The art contest is the first step in creating awareness that there is a future in science and nutrition that we’re creating in Kannapolis.”